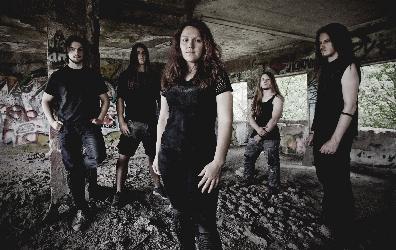 INCERTAIN was founded in October 2012 in Andernach, Rhineland-Palatinate, Germany. Being a very young band back then, they tried first on stage within their local scene. Only Luis Strietholt (drums) had went through several live experiences with his former Indie Rock project Celebrate Simon before. The five-headed Germans are musically influenced by Speed and Thrash metal legends like Overkill, Exodus or Testament, but also found inspiration in songs of the essential Death Metal representatives Vader, furthermore in modern acts like Lamb of God. These influences find evidence not only in INCERTAIN´s instrumental songwriting, but especially in singer Liane Walter’s growling in 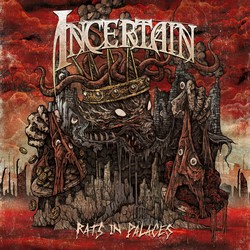 traditional Death Metal manner. Being well related to one of the best known local live locations, Juz Live Club in Andernach, many chances to play at established festivals such as „A Chance for Metal Festival“ & „Loud!Fest“ occurred. In May 2016, INCERTAIN performed as co-headliner in front of a fulliflatched festival tent, comprising 1000 people at the “A Chance for Metal Festival”. Furthermore they supported the German Thrash Metal heroes Tankard from Frankfurt at one show of their „Rest in Beer“- tour at Juz Live Club. The response on their live shows was constantly positive from crowds of all ages, and INCERTAIN soon went on stages in Cologne, Frankfurt, or also as part of the warm-up show of MISE Open Air and Taunus Metal Festival in Hessia.

The first INCERTAIN album “Rats In Palaces” was recorded by Michael „Freio“ Haas (Sober Truth, The Gate, Sic Zobe, Erzfeind) at Big Easy Studio near Hennef, Germany from August 2016 to July 2017. Subsequently, the record was mastered by Aljoscha Sieg at Pitchback Studios (Eskimo Callboy, August Burns Red, Vitja, We Butter The Bread With Butter). Costin Chioreanu (Twilight Media), who designed artworks of Arch Enemy, Grave, Vader and Entombed, made the cover and booklet for “Rats in Palaces”. For the upcoming music video and single release of the song „Amok“, INCERTAIN worked with Pete Kunz, singer of the band Bloodspot from Limburg.