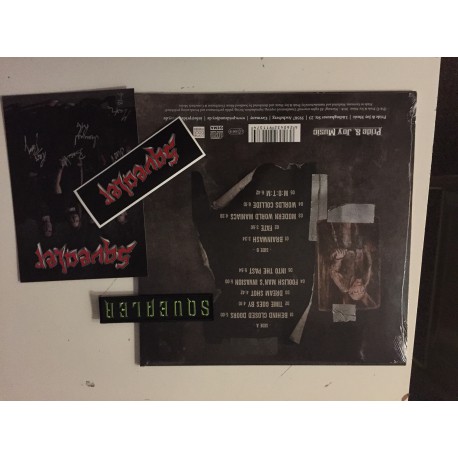 limited on 300 copies world-wide, 20 first LP orders via www.prideandjoy.de/shop will include a free patch, a signed card and a sticker

The band is now back with full force and with a powerful line-up which just was completed last year. SQUEALER now consist of Lars Döring (guitars), Michael Schiel (guitars), Sebastian Werner (vocals) and Manuel Roth (bass). The band has started to perform live again in 2016 and since then played several gigs and festivals (incl. 70000 Tons Of Metal) with the new and convincing band constitution. The live shows were directly followed by the recordings for the new album Behind Closed Doors. The new record impressively proves the strength of the new SQUEALER line-up. To complete the makeover, a new, highly professional team was added for the album production.   Ito Grabosch took care of the recordings while Roland Grapow (Helloween/ Masterplan) handled the mixing and Mika Jussila (Nightwish, Lordi, Him, Children Of Bodom) the mastering. The artwork was designed by Thomas Ewerhard (Amon Amarth, Avantasia).

Due to huge success of the comeback CD “Behind Closed Doors”, this album now will be available on vinyl from July 20th, 2018.