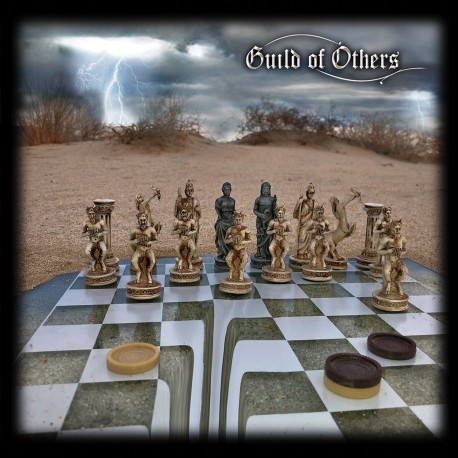 Guild of Others, begun by Tom Wallace (drums) and Steve Potts (guitar), is a collection of musicians from various bands and backgrounds making progressive metal music.  As songs between the two began taking shape, questions of whom else to bring into the fold arose.  Considering the style of music the two were creating, the keyboardist most desired was easy.  Derek Sherinian (Sons of Apollo, Dream Theater, BCC, etc.) was top of the list. Upon hearing the demos, Derek's response was perfect.  He described the music as, "Aggressive and adventurous.  Without being too proggy."  He liked it and would add his talents.

"Guild of Others accomplish the near impossible, and that's make progressive metal that is accessible," proclaims venerated rock author/critic Martin Popoff.  High praise from someone steeped in musical knowledge and history.  He continued, "This sounds like thinking man's stadium rock.  In a plethora of old and new school styles, these hooky compositions keep the proceedings earthy and built for the stage."  He went on to place Guild of Others' debut among some of the rock world's most legendary and successful acts.  "It's songs very much like this that resulted in early notoriety for Rush and even Styx for that matter.  There's no reason why Guild of Others can't serve large pockets of fans... who believe in those same ideals toward both heaviness and craftsmanship."

Among the material were two songs Steve and Tom both felt needed fretless bass.  For that they reached out to well-known bassist, Tony Franklin (The Firm, Blue Murder, etc.).  Steve and Tom were floored by Tony's playing.  His style and tone offered everything needed to complete the bottom end.  His counter melodies and bass fills were superb.  The guys requested he record the six remaining songs and he obliged.

For vocals, local singer Mark Hammond was tapped for six of the songs.  Michael Sadler (Saga) and Henrik Bath (Darkwater) lend their talents for the remaining two.  The three vocalists offer three unique sounds and styles.  All of which work perfectly for the material.

The "Others" part of Guild of Others suggests future recordings will always involve other musicians.  Tom and Steve are the driving force behind Guild of Others.  They will remain.  While always appreciating those who have participated in this debut effort and welcoming their return, there is already material for a second album. with hopes of bringing in new names and making new friends.