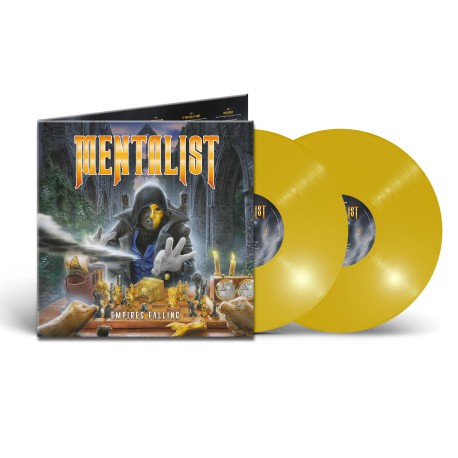 This item is only available for German customers due to high international shipping costs.

We will calculate your shipping costs then (DHL shipping which will be between 20,00 and 50,00 Euro) depending on your location.

MENTALIST, the Saarbrücken Germany based Melodic Metal group, like maybe no other recently new band has managed to left big, positive marks in the Power Metal scene!

After the big success of the debut album „Freedom Of Speech“ (2020), the German/ Swedish foursome consisting of Peter Moog (guitars), Thomen Stauch (dr., ex BLIND GUARDIAN), Kai Stringer (guitars) and Swedish exceptional singer Rob Lundgren  just slighty scraped past of the German official media control album charts with their 2021 effort „A Journey Into The Unknown“ (trend charts: #63)! On iTunes, MENTALIST reached an impressive #2 as highest position at the Metal charts, and the fans of the Facebook group „power Metal“ with 110K followers voted „A Journey Into The Unknown“ as best Power Metal release of the year 2021!

„Empires Falling“, the third full length by the German/Swedish outfit, now continues where its predecessors have stopped! Oliver Palotai (keys, Kamelot) und Mike LePond (b., Symphony X) again joined MENTALIST as energetic guests on keyboards and bass. On this release, outstanding musicianship teams up with fabulous melodies and fine, subtle arrangements as parts of epic, stirring and enery-driven songs which reinforce the high quality of MENTALIST!

„Empires Falling“ will be released on September 16th, 2022 on CD, digital, and as golden-coloured 2-LP. A tour for autumn 2022 is currently in preparation.