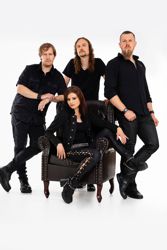 Germany based Heavy Metal band CRYSTALLION was founded in 2003 by bassist Steve Hall and drummer Martin Herzinger. On their first two album releases, "A Dark Enchanted Crystal Night" and "Hattin", they offered a bombastic Metal sound with obvious influences from which came from groups like Rhapsody, Helloween or Dragonforce. Powerful riffs and hooks here met with elaborated songwriting and stirring melodies. Both releases were very well received by their permanently growing fanbase. Numerous live gigs and festival appearances in Germany, Austria, Switzerland and the Czech Republic with bands such as Bonfire and Running Wild amongst others followed. With the release of the album “Hundred Days” (2009), CRYSTALLION moved away from their double-bass orientated songwriting over to rather Heavy & Hard Rock colored songs – without losing their own roots. In 2012, the Bavarians played the Metal-Fest at the prestigious Lorely venue together with other artists like Megadeth, Powerwolf & Edguy. The group’s fourth studio album “Killer” saw the light of day in the beginning of 2013 and continued to follow the Heavy & Hard Rock paths.

A demo with four brand new tracks was sent to Pride & Joy Music in July 2018 and resulted in a new record deal for the band with this German Metal label. Unfortunately, singer Thomas Strübler soon afterwards, in May 2019, decided to leave the band after being a member for 15 years. His successor was found in female singer Kristina Berchtold. In Summer 2019, some festival appearances with Berchtold as frontwoman followed and included the Free & Easy Festival in Munich (with Queensryche and Rose Tattoo) and the „Trveheim“ Festival in Munich with Riot V & Stormwitch. After a long break due to the Covid-19 pandemic, CRYSTALLION returned onto stage in October 2020 at the Rockokfest in Landshut, Germany.

With Munich powerhouse singer Bertchold on the micro, the quartet now has managed to leave all Power Metal clichés behind and to start the work on their new album “Heads Or Tails” with fresh breath. This release will lead the way for CRYSTALLION and be finally available in stores from February 19th, 2020. Since July 2019, the experienced and versatile guitar player Werner Hießl from Linz, Austria is part of the line-up.

The album „Heads Or Tails” was produced by CRYSTALLION, engineered & mixed by Mario Lochert @ SeriousBlack Studios and mastered by Jan Vacik @ Dreamsound Studios. The artwork comes from Martin Herzinger @ Venusworksmedia.